In our new monthly round-up of movie reissues we examine some of the best classic films coming back to stores on Blu-ray and 4K Ultra HD, bringing you a monthly rundown of new additions to our exclusive movie ranges like The Premium Collection and our brand new VHS Range, as well as the best movies being released in 4K Ultra High Definition for the first time and new reissues from the folks at the BFI, Criterion, Arrow Video, 88 Films and more!

This month we take a look at 10 of the best movie reissues coming your way in August 2018, featuring some classics from the likes of John Carpenter, Steven Soderbergh and John McTiernan...

Perhaps as a result of being released just two weeks after Steven Spielberg's much more family-friendly take on extraterrestrial life in E.T., John Carpenter's cult sci-fi horror The Thing was almost universally panned – hated, even – by critics when it first arrived on cinema screens in 1982. But just just like another sci-fi film released that year, Ridley Scott's Blade Runner, Carpenter's film has managed to shake off the initial negative reactions and has slowly but steadily come to be appreciated as a classic of the genre. As a result, The Thing has been reissued numerous times since its initial release on various formats, but never quite like this.

The Thing is one of several 1980s films set to be reissued this week as part of a brand new series of collectible limited editions, The VHS Range, which takes some of the decade's most iconic films and delivers them in gloriously retro style with a VHS cassette-type box containing Blu-ray and DVD versions of the film, each with a fold-out theatrical poster, collectible bubblegum cards and stickers. Each disc also comes packed with extras and in the case of The Thing that includes a feature commentary from John Carpenter and Kurt Russell, a mini-documentary on the making of the film, outtakes, a theatrical gallery and the original trailer.

The VHS range is exclusively available at hmv from this week and currently comprises 12 classic 80s movies including Back to the Future, E.T. and Beverly Hills Cop. More titles are expected to arrive in stores later this year, but in the meantime you can find the full range here in our online store. 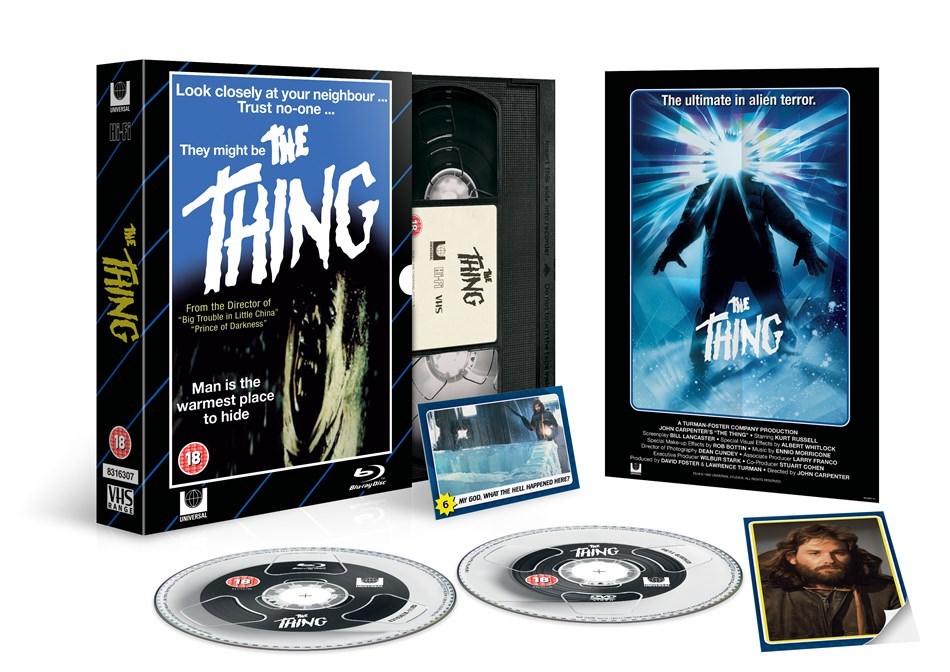 George Orwell's seminal novel 1984 only seems to become more relevant as time passes, which is either a testament to Orwell's visionary genius or a damning indictment of the way our society has developed since Orwell's prophetic story was first published in 1948. Orwell's novel has been adapted for the big screen on two occasions, the first arriving in 1956 and helmed by Logan's Run director Michael Anderson. However, it is arguably Michael Radford's version starring John Hurt and Richard Burton that has become the most vivid depiction of Orwell's nightmarish dystopian future, and it's this version that is set to be reissued later this month.

1984 is set to arrive in stores on August 13th as part of our growing exclusive-to-hmv series The Premium Collection, which takes revered films across all genres and delivers them to shelves as part of an exclusive package which includes remastered versions of the film on Blu-ray and DVD, collectible art cards and lobby-style stills from the movie, as well as a digital copy you can download via Ultraviolet. 1984 is just one of this month's additions to the Premium Collection, you can find the full range of films reissued so far here. 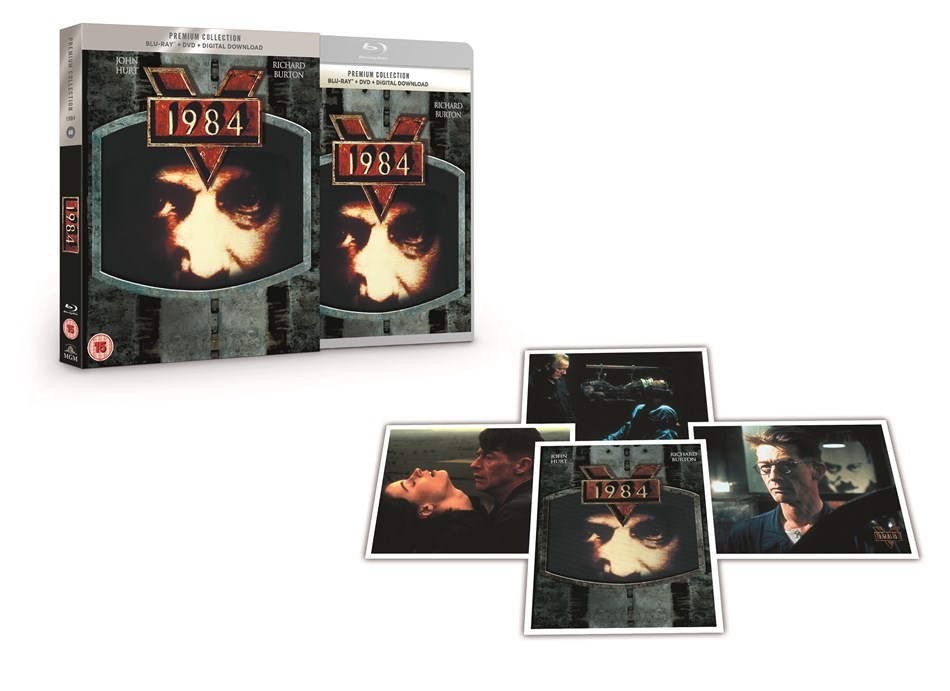 Steven Soderbergh's feature-length directorial debut Sex, Lies, and Videotape arrived in 1989 and starred Andie McDowell as as a woman who discovers that her husband John (Peter Gallagher) is having an affair with her sister. She then forms an odd relationship with an old schoolfriend of her husband named Graham (James Spader) after becoming intrigued by Graham's unusual hobby of recording conversations with women in which they intimately discuss their sexual experiences and fantasies.

Soderbergh's Palme d'Or-winning film is one of the latest additions to the Criterion Collection, a growing library of “culturally significant” films which are restored / remastered and re-released with a series of exclusive extras. This version is set to arrive in stores on August 6th and benefits from a new 4K restoration transferred from the original film negatives and a new 5.1 DTS HD surround sound mix, as well as a host of extra features including director commentary, a mini-feature in which Soderbergh answers questions from fans and a new documentary detailing the film's production process. You can find the full list of tech specs and special features here.

Susan Seidelman made her directorial debut in 1982 with this tale of a young woman named Wren who heads to New York with the aim of getting involved in the city's burgeoning punk rock scene, only to find that its leading lights are now gravitating west to Los Angeles. Hooking up with the former leader of one-hit wonders The Smithereens (played by Television's Richard Hell), Wren sets out to raise the money for her journey west by any means necessary.

The film is another of this month's additions to the Criterion Collection and includes a new 2K remaster, new interviews with director Seidelmen and actress Susan Berman, as well as two of the director's early shorts, And You Act Like One Too (1976) and Yours Truly, Andrea G. Stern (1979). The new version is set to arrive in stores on August 27th.

Michael Cimino's Oscar-winning Vietnam War drama starring Robert De Niro, Christopher Walken and John Savage celebrates its 40th anniversary this year with a new special edition that brings Cimino's film to 4K for the first time. A new collector's edition is set to arrive in stores on August 20th and alongside the new 4K remastered version of the film is a host of extras that includes interviews Cimino, Savage and director of photography Vilmos Zsigmond, as well as a reel of deleted / extended scenes and audio commentaries from both Zsigmond and Cimino.

On top of all that the collector's edition includes a CD featuring the original soundtrack, five art cards, an early version of the film's script and a 64-page booklet. 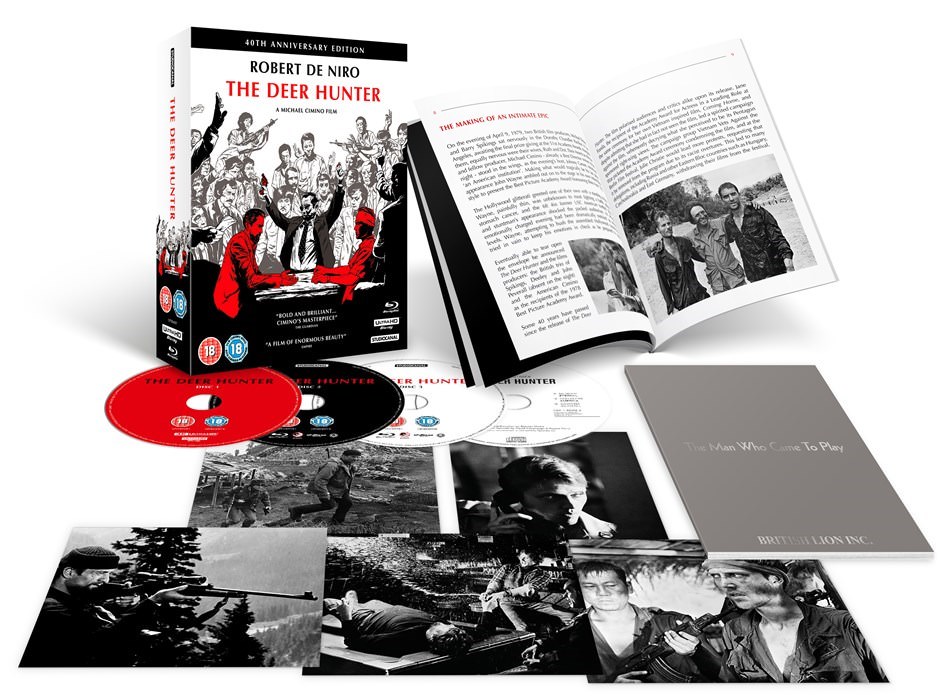 John Sturges' 1968 espionage thriller Ice Station Zebra is another film joining The Premium Collection this month and is set to arrive in stores on August 13th. Rock Hudson and The Prisoner star Patrick McGoohan lead the cast of Sturges' film, which is based on Alastair McLean's 1963 novel of the same name and tells the story of a US submarine dispatched to the frozen wasteland near the North Pole in order to retrieve a Soviet satellite filled with valuable information.

The Premium collection includes both Blu-ray and DVD versions of the film as well as a collection of art cards and lobby-style stills from the film, while the bonus features include a trailer gallery and a vintage 'making of' documentary, The Man Who Makes a Difference. 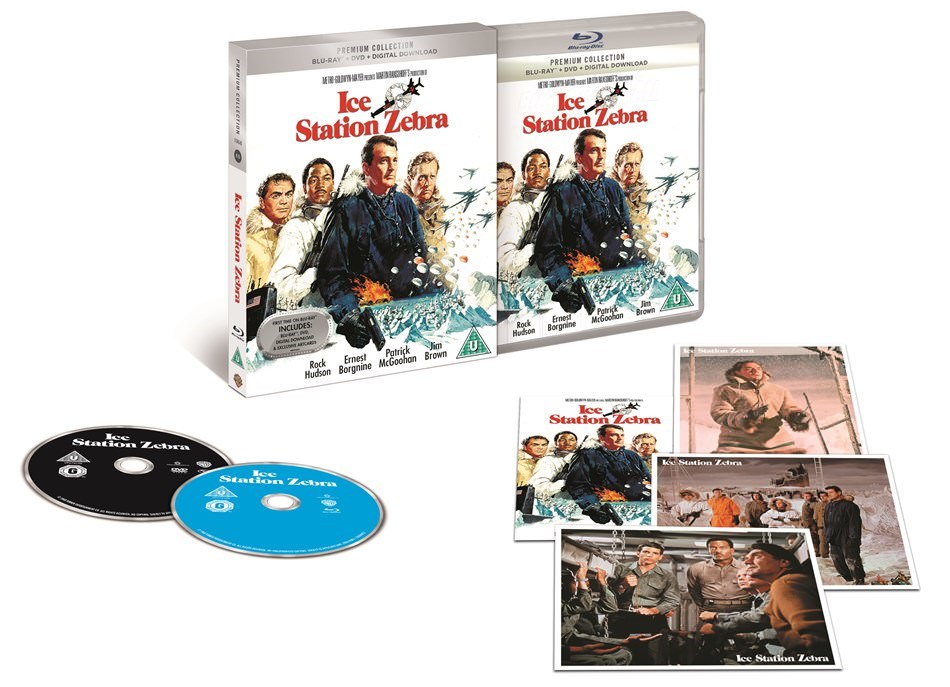 Fans of Shane Black will no doubt already be aware that the director's upcoming reboot The Predator is set to make its arrival in cinemas in September this year, but in the meantime a newly remastered version of John McTiernan's 1987 original starring Arnold Schwarzenegger is set to be released this month.

Released in 4K Ultra HD for the first time, the newly reissued version of Predator includes both 4K and Blu-ray discs as well as a digital download and is due to arrive in stores on August 6th.

Another of the exclusive Premium Collection titles arriving in stores in August, John Frankenheimer's 1966 film Grand Prix stars James Garner as a racing driver who finds himself battling for supremacy on the racetrack while becoming romantically entangled with the estranged wife of his injured teammate.

The reissue includes both Blu-ray and DVD versions of the film along with collectible art cards and stills, as well as a series of bonus features which includes no fewer than five featurettes, including a 'making of' documentary , an in-depth analysis of Formula 1 racing in the 1960s and a behind-the-scenes look at legendary racing circuit Brand's Hatch. Grand Prix is due to arrive in stores on August 13th. 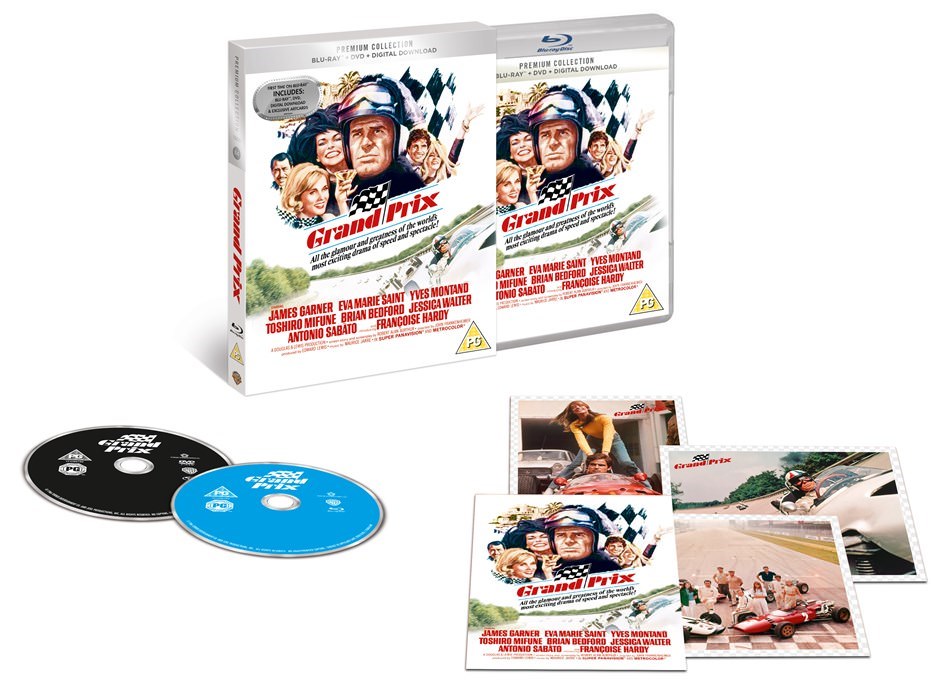 Based on the Frederick Forsyth novel of the same name, Ronald Neame's 1974 espionage thriller stars Jon Voigt as a journalist who makes a startling discovery while reading the diary of an elderly Jewish man who committed suicide, setting him on a dangerous trail that could lead to exposing the identities of Nazi war criminals in hiding and uncover a shadowy organisation populated by former members of the S.S.

A new limited edition reissue of Neame's film is set to arrive in stores on August 27th and includes a new 2K remaster of the film and various bonus features, including the BFI's 2003 interview with the director, a 17-minute Super 8 version, theatrical trailer and image gallery, as well as further interviews with cinematographer Oswald Morris and stunt coordinator Vic Armstrong.

Our final pick this month is another Premium Collection title in the form of Mark Robson's WWII caper Von Ryan's Express, in which Ol' Blue Eyes himself Frank Sinatra stars as an American POW who hatches an implausible but hugely entertaining plan to escape the clutches of the Nazis by stealing a train and riding it all the way to Switzerland.

Like the other reissues in the Premium Collection the film comes with two discs, the usual selection of art cards and stills and a wealth of bonus material which includes audio commentary, a reel of trailers and TV spots for the film and a series of featurettes detailing the making of the film, the history of war movies in Hollywood and a look the legacy of composer Jerry Goldsmith's work. 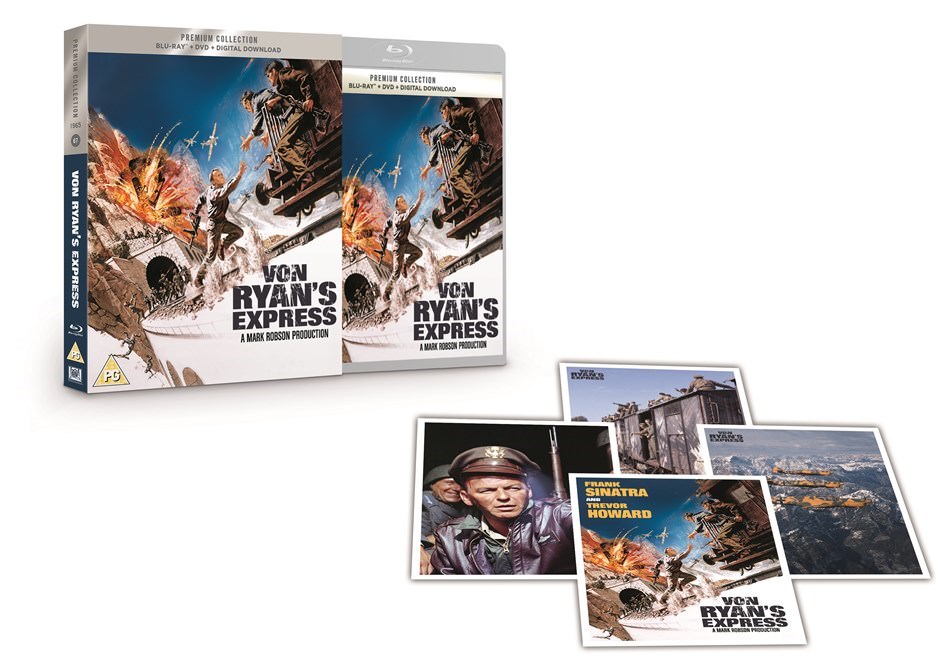