An exclusive edition of Jaws, some epic John Carpenter box sets and a new 4K remaster of 2001: A Space Odyssey are amongst the best new reissues coming in October...

As you may already have noticed, hmv's exclusive VHS Range has expanded since it first launched at the beginning of August this year, adding a dozen new titles to the list classic films available - and they don't come much more classic than this. By some distance the most pre-ordered of the new films added to the range, Steven Spielberg's 1975 thriller needs little introduction from us – but what's in the new version?

Just like the others in the range, The VHS edition of Jaws comes as a two-disc Blu-ray and DVD set presented in a stylish retro VHS-style box and packaged with collectible art cards. There are also a huge range of bonus features including two feature-length documentaries on the making and marketing of the film, as well as others such as deleted/extended scenes, production photos from the set and storyboards. Jaws is set to arrive along with the next batch of VHS Range titles on October 29th – you can find more of them here. 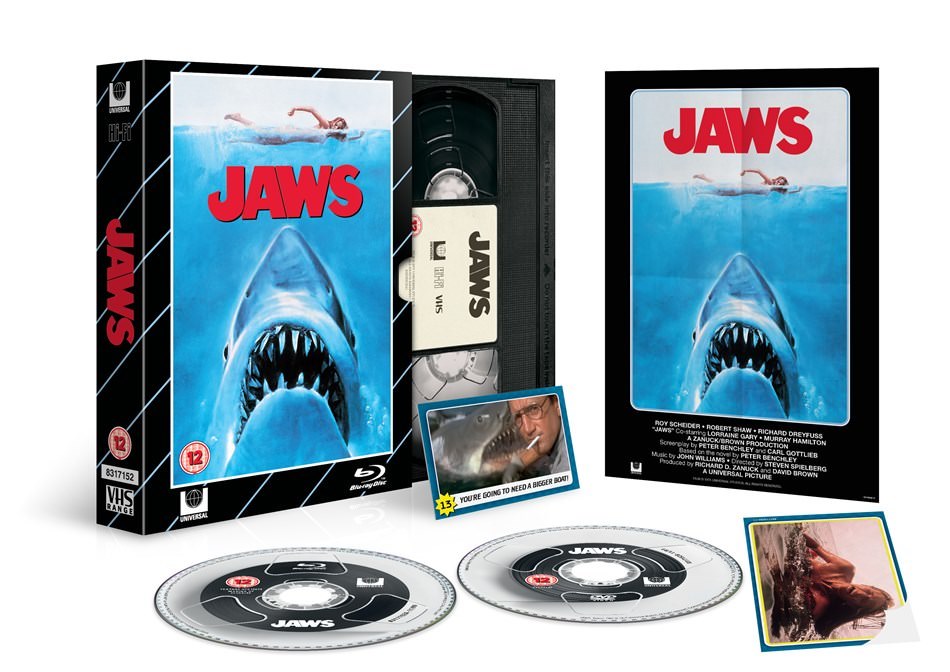 The Hunchback of Notre Dame

Victor Hugo's gothic novel Notre-Dame de Paris has been adapted many times and to date there have been more than a dozen feature films either directly adapted or otherwise based on Hugo's story, but the 1939 version made by RKO Pictures and directed by William Dieterle is perhaps the version which has made the biggest cultural impact. The set for the film was one of the largest ever constructed in Hollywood at the time and the film features an utterly magnetic performance from Charles Laughton in the role of Quasimodo.

It's this version which joins hmv's exclusive Premium Collection this month, available as a two-disc Blu-ray and DVD set, presented in a collectible slip case and packed along with the usual extras including art cards and a min lobby-style theatrical poster. The Hunchback of Notre Dame is due to make its arrival in stores on October 15th. 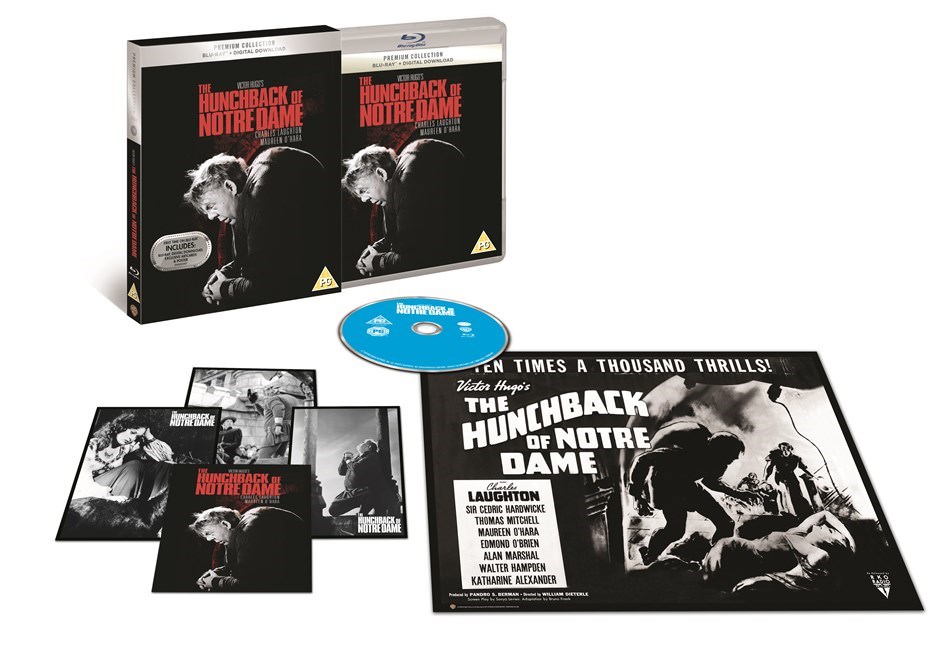 October is turning out to be a bumper month for John Carpenter fans; not only will this month see Halloween issued in 4K Ultra HD for the first time ever, there's also the news that several of his other classic horror films are being re-released in 4K for the first time as special collector's editions, including The Fog, Escape From New York and this underrated gem from 1988.

They Live is one of three John Carpenter classics being reissued this month in the form of special collector's editions featuring a brand new 4K restoration of the main feature and a host of extras and collectibles. In the case of They Live this includes 4K and Blu-ray discs as well as a soundtrack CD, theatrical poster and a new feature-length making-of documentary. All three titles are set to arrive in stores on October 29th, you can find the others here. 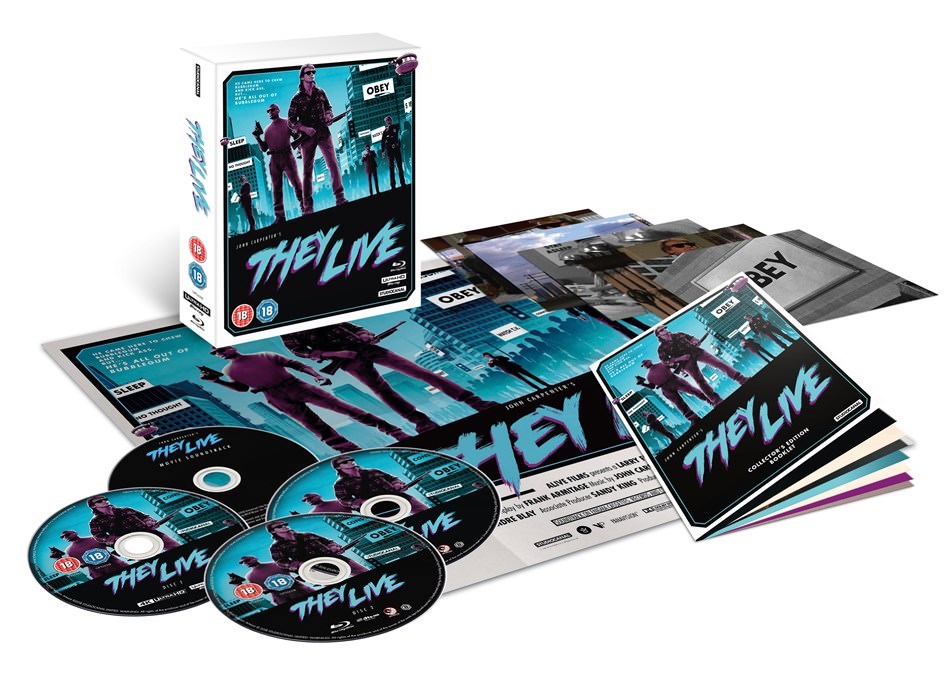 Stanley Kubrick's masterpiece is undoubtedly one of the most influential films of the 20th century and you may have seen some of the recent news surrounding Christopher Nolan's involvement in a new 4K transfer of the film from the original negatives, which Nolan has been presenting and touring at several leading film festivals, including IMAX screenings of the new version at Cannes and the BFI.

The screenings were shortly followed by the announcement that the new 4K remaster is set to find its way onto home cinemas systems and this month the film is set to be reissued as a 4K Ultra HD disc for the first time, as both a collectible Steelbook edition and an expaned special edition (pictured below), which includes a host of extras including new featurettes examining the film's legacy, as well as archival interviews with Kubrick himself. Both 4K and Blu-ray versions arrive in stores on October 29th – you can find a full list of the extras included the Steelbook edition here, and the Special Edition here. 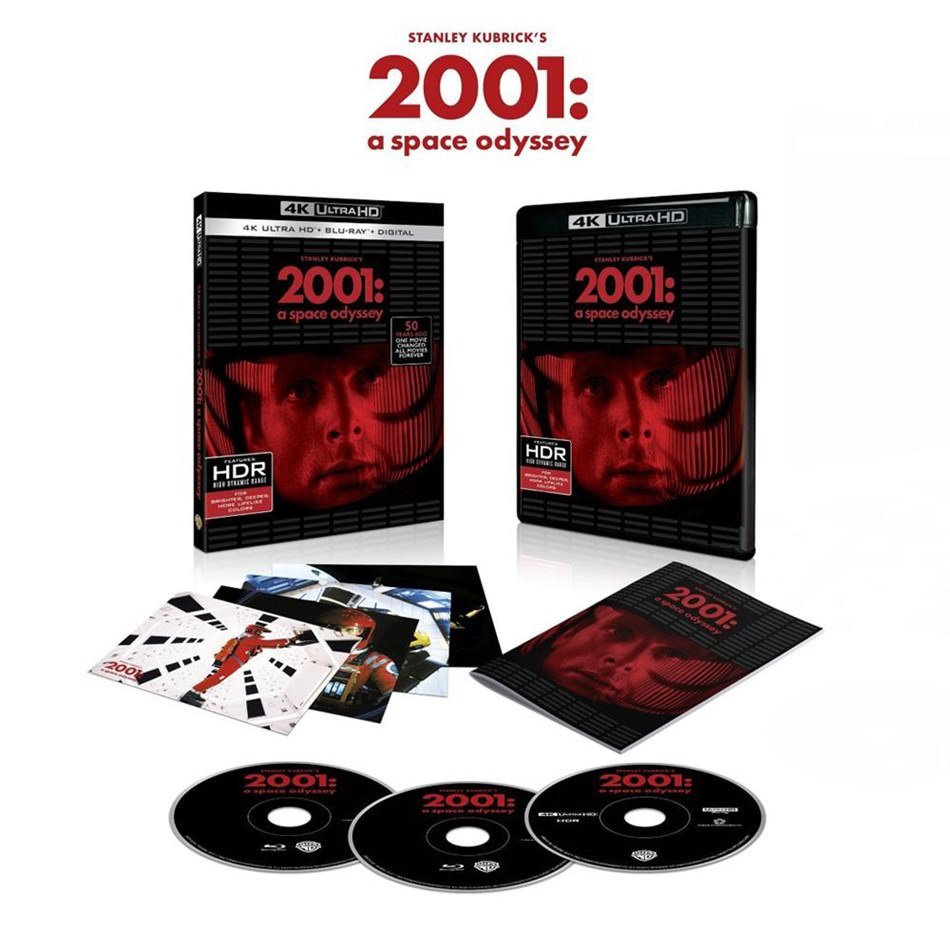 Another of this month's additions to hmv's exclusive Premium Collection is this classic monster movie from 1949 by director Ernest B. Schoedsack. Unlike his counterpart King Kong, Mighty Joe Young is a relatively well-trained monster who remains obedient to the woman that raised him, but Hollywood's attempts to make him their next big attraction soon turn predictably sour.

Available on Blu-ray for the first time this month, the Premium Collection edition comes with usual selection of collectible art cards, theatrical poster and exclusive slipcase, and is set to arrive in stores on October 15th. 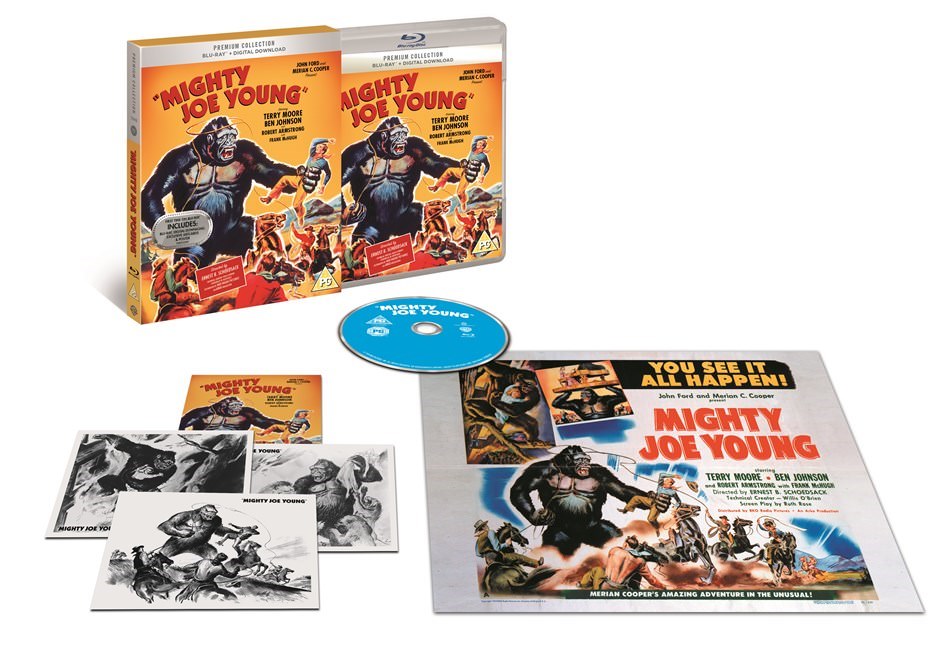 Wes Anderson's feature-length debut still holds up as one of his most enjoyable films and this month Rushmore becomes the latest addition the Criterion Collection, which aims to celebrate movies with special cultural significance.

Featuring a new digital transfer of the director's cut overseen by Anderson himself, the Criterion Collection edition also comes with a host of extras including commentary by Anderson, Owen Wilson and Jason Schwartzman, an episode of The Charlie Rose Show featuring interviews with Anderson and Bill Murray, and an exclusive behind-the-scenes documentary by Eric Chase Anderson, as well as loads of other goodies like audition tapes for the movie and an exclusive poster. The new edition is set to arrive in stores on October 29th.

Christopher Nolan's Dark Knight trilogy is arguably still the high watermark of the caped crusader's many appearances on the big screen and there's little we could say here that hasn't already been said about Heath Ledger's iconic performance as The Joker, but if you're yet to add the films in Nolan's trilogy to your collection then there are some new versions arriving in stores this month worth taking a look at.

This week the folks at Warner Bros. are releasing three brand new limited edition filmbook versions of all three films in the Dark Knight trilogy, all of which are issued on both 4K Ultra HD and Blu-ray discs and come with an exclusive booklet and a host of extras detailing everything from the evolution of the Batmobile to the designs process for Batman's iconic outfit. All three are available in hmv stores and online from October 1st. 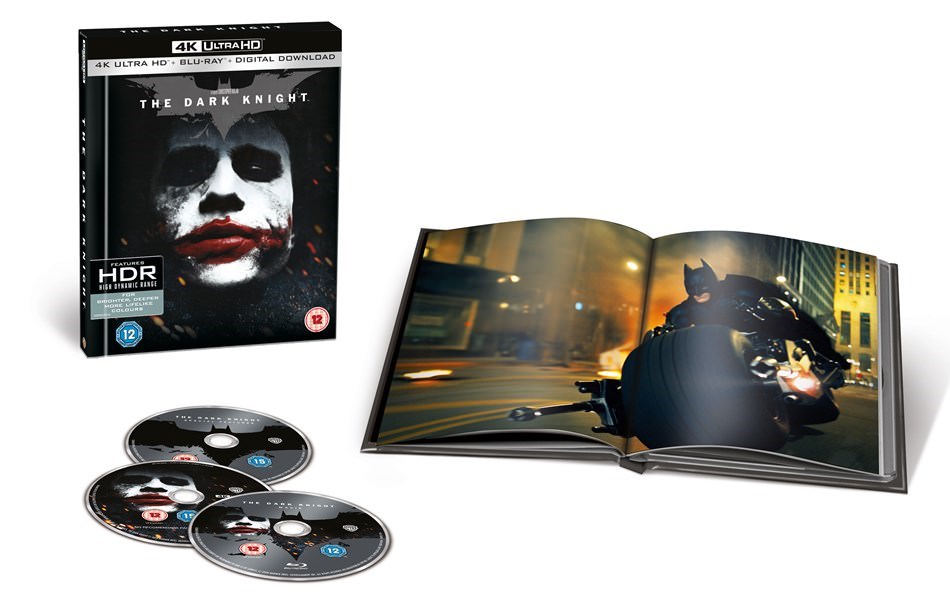 First released in 1992, Bernard Rose's chilling horror was based on horror master Clive Barker's novel The Forbidden and soon became a cult classic, thanks in large part to an iconic performance from Tony Todd and an epic score courtesy of Phillip Glass. More than 25 years since it first made its arrival in cinemas, Sony and TriStar Pictures are set to release a special limited edition version of the film just in time for Halloween.

The Limited Collector's Edition is set to arrive in stores on October 29th and benefits from a new 2K remaster and 5.1 mix in DTS-HD, as well as a huge collection of extras that includes new commentaries, new interviews with Tony Todd and Virginia Madsen, a range of featurettes detailing the making of the film and three of Rose's short films, as well as new artwork and six lobby cards. A must-have for any Clive Barker fans. 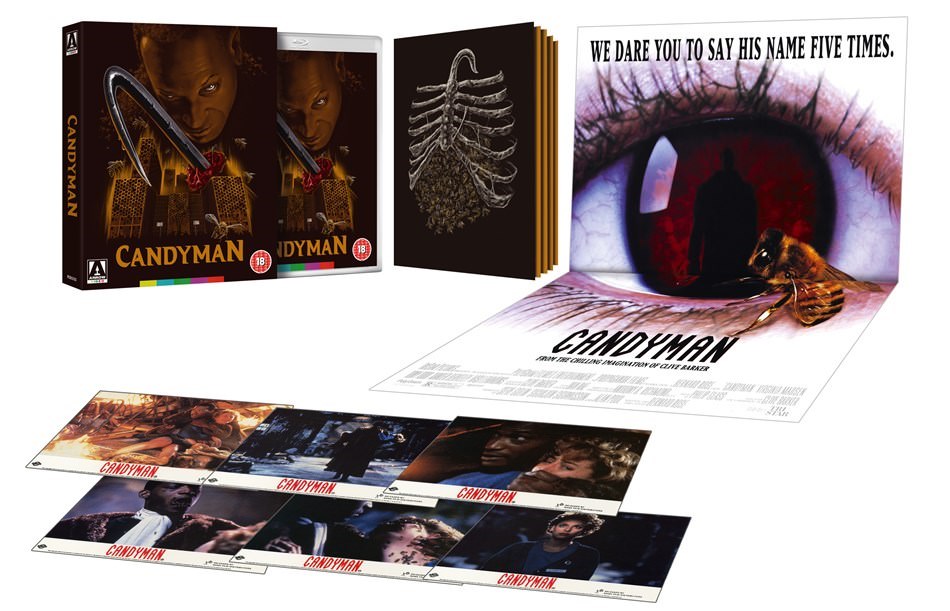 Alongside Rushmore, the other addition to the Criterion Collection this month is this groundbreaking 1944 gothic horror from director Lewis Allen, starring Ray Milland and Ruth Hussey as the new owners of an old house which, they soon discover, is plagued by ghostly apparitions.

The subject of a remake in 2009, the 1944 original is set to be reissued on Blu-ray fro the first time and as with all the other films in the Criterion Collection, the new version benefits from a new 2K restoration, as well as as series of extras including a new visual essay by filmmaker Michael Almereyda and two radio adaptations. The Criterion version is set to arrive in stores on October 15th.

Night of the Demon

Jacques Tourneur's 1957 horror film comes to Blu-ray for the first time in the UK this month thanks to the folks at Powerhouse Films, who are gearing up to release a special numbered limited edition of Night of the Demon on October 22nd. The limited edition benefits fromthe BFI's 2013 2K remaster and comes with an enormous range of extras and other goodies including a two-sided poster, a Super-8 cut of the film and an extensive range of mini-features and documentaries detailing every aspect of the film's production process.

You can find a complete list of all the included extras here in our online store.